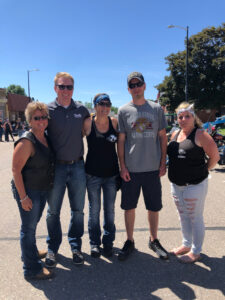 The 16th annual Freedom Run took place on Saturday, June 18 in Minnesota Lake, with nearly 300 bikes or classic cars participating in the 100-mile ride through scenic south-central Minnesota. The pre-ride program included a chilling rendition of the Star-Spangled Banner from the Freedom Run’s own Shellie Berndt, followed by the awarding of trophies for the “Best Bike” and “Best Car” participating in the ride. The program continued with remarks from MMAF representatives and the presentation of a MMAF grant to LCPL Mark Trnka, of Minnesota Lake, who shared a few words on the importance of MMAF and supporting veterans. Following the grant presentation another MMAF grant recipient, SGM Pierre Stencel, shared a patriotic message encouraging Minnesotans to continue to make a difference in the lives of service members and their families. The program concluded with an invocation from Pastor Rudy Maurer as participants enthusiastically headed out on the road.

When reflecting on the Freedom Run, MMAF Project Director, Joe Bennek, comment “Eugene Sit, our Founder, wanted MMAF to be a grassroots effort to support service members and their families, with people from all over the state coming together to say “Thanks.” The Freedom Run as it truly embodies his vision for showing support for those who have served and continue to serve. Between Mark Trnka and Pierre Stencel’s messages, we can all make a difference in the lives of service members and their families, and that’s what the Freedom Run continues to do, make a difference.” We offer a special thank you to Lorrie Petersen, Kim Giese, Danny Woitas, Shellie Berndt and the rest of the Freedom Run Board for their long-time support. The Freedom Run has raised over $300,000 for MMAF since its inception.